Italian astronaut and International Space Station Commander Samantha Cristoforetti sent a warm “Shalom” to Israel from space on Saturday in a tweet accompanied by pictures of the city lights of Tel Aviv and Haifa and some pictures of the Dead Sea taken from the orbiter.

“Shalom and Hello Israel and the cities of Haifa and Tel Aviv at night. I was also intrigued by these straight lines at the southern end of the Dead Sea – it turns out to be a group of Jordanian salt evaporation pools!” she posted.

Cristoforetti, 45, became the first European woman to command the International Space Station (ISS) this week in a live broadcast from space on Wednesday.

The outgoing commander, Russian cosmonaut Oleg Artemyev, used the occasion to apparently make a rare space reference to the war in Ukraine, saying that “despite the storms on Earth, our international cooperation continues.”

Artemyev handed Christoforiti a golden key, symbolizing that she is the new commander of the space station until her return to Earth on October 10.

Shalom and hello #Israel and the cities of Haifa and Tel Aviv at night. I was also intrigued by these straight lines at the southern end of the Dead Sea – it turns out to be a group of Jordanian salt evaporation basins! #MissionMinerva esa ESA_EO @city4tnight @space station pic.twitter.com/cv5Paz43zp

She is the fifth woman—and the first non-American—to lead since the role was created in 2000.

The commander of the International Space Station is responsible for all tasks performed by crew members aboard the space station, which orbits more than 400 kilometers (248 miles) above Earth.

During an emergency, the commander has the authority to make decisions without waiting for instructions from ground control. In the event of a fire, depressurization or the discovery of a toxic atmosphere – the three specific emergency scenarios – it is up to the commander to ensure that the crew’s lives are saved first. 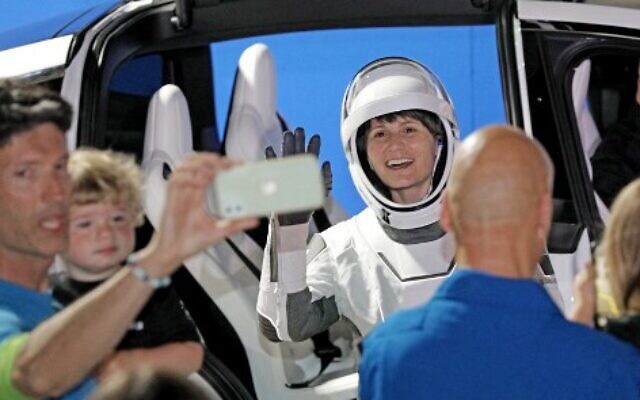 Italian astronaut Samantha Cristoforetti of the European Space Agency (ESA) poses for a photo with her family as Crew 4 exits the Neil-A-Armstrong Operations and Checkout Building on its way to launch Complex 39A at the Kennedy Space Center in Florida, April 27, 2022 (Greg Newton/ Agence France-Presse)

French astronaut Thomas Pesquet, who served as commander of the International Space Station, said last year that it was “like getting on a boat – there is only a master on board after God.”

The decision on who becomes the leader is taken jointly with the five space agencies involved in the station: NASA, Russia’s Roscosmos, European Space Agency, Canadian Space Agency, and Japan’s JAXA.

During the handover ceremony, Artemyev praised the work of all ten people on board the space station – four Americans, five Russians and Christoforiti.

He said he views the International Space Station as a “continuation of the Apollo Soyuz programme,” the first manned international space mission carried out by the United States and the Soviet Union in 1975 in the midst of the Cold War.

It was a time when “the relationship between states was not simple either, as there were people who found the path that leads to peace, and the way that war ends everywhere,” said Artemyev, without mentioning Ukraine by name. 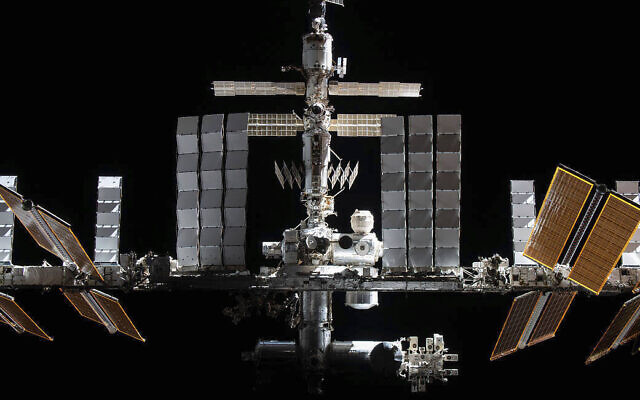 In this November 8, 2021 file photo provided by NASA, the International Space Station is photographed from the SpaceX Crew Dragon Endeavor. (NASA via AP, file)

For her part, Cristoforetti praised the work of her crewmates, saying that they all make up “a small part of the giant team on Earth” that runs the space station’s operations.

The space station, which has long been a symbol of close post-Cold War relations between Russia and the United States, has been in a tough spot since Moscow invaded Ukraine in February.

Moscow reacted angrily to unprecedented sanctions over the war, and the International Space Station was one of the last remaining areas of cooperation between Russia and the West.

I am proud of covering Israeli arts and culture for The Times of Israel. My rhythms show the “other side” of life here, with inspiring artists of all stripes – musicians, painters, writers, chefs, winemakers, filmmakers and screenwriters.

Somehow the creative spirit of Israelis thrives despite all the obstacles this small country has faced. I am honored to share these wonderful stories with ToI readers and listeners, raising your awareness of the vibrant Israeli arts community.

Your support, through the Times of Israel community, helps us continue to bring stories as amazing and impressive as mine to readers around the world. Will you join our community today?

Yes, I will give Yes, I will already give a member? Sign in to stop seeing this

You are a professional reader

We are really glad you read X Times of Israel articles in the last month.

That’s why we started The Times of Israel ten years ago – to provide discerning readers like you with must-read coverage of Israel and the Jewish world.

So far we have a request. Unlike other news outlets, we have not put in place a paywall. But since the journalism we do is costly, we invite readers whom The Times of Israel has become important to help support our work by joining Times of Israel Society.

For as little as $6 a month, you can help support our quality journalism while enjoying The Times of Israel Free adsas well as access EXCLUSIVE CONTENT Available only to members of the Times of Israel community.

Thank you,
David Horowitz, founding editor of The Times of Israel